T4 templates are a great way to write code that writes code. Huh? I’m not going to go into it here, so if you want more information, see Scott Hanselman’s post on T4 templates, as well as Oleg Synch’s posts.

One of the pain points when writing T4 templates is with debugging them. Sometimes you’ll save a .tt file and get some obscure error message that is impossible to figure out, and you have no clue what part of your T4 file is messed up.

It is possible to debug them, and Oleg provides some great pointers. Here is my summary of how to get it working:

I recently ran across some code in a test class where I saw that the class was initialized in a constructor rather than in a method with the ClassInitialize method, and it made me wonder - what’s the difference?

One way to do this is to put the initialization code in the constructor, like this:

Another way is to create a static method with the ClassInitialize attribute, like this:

So what’s the difference?

I’ve been keeping an eye out for a simple way to share a large file (1-5 GB) to another person over the internet privately, and I finally found something that I like. Sendoid.

The uploader and downloader can use it either from the web page or from the client app they provide. However, if you use the client app you get the ability to resume a transfer in the event that it’s interrupted, which is very important for large files. 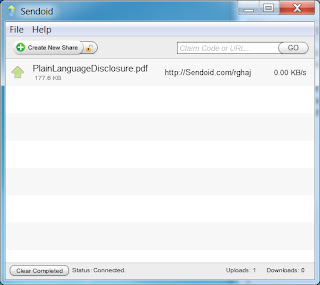 You can have multiple people downloading from you at the same time, and when you’re done, remove the file from the list or close the app. Very simple, no registration or signup required.

I ran into a strange problem this week on a client’s .Net site I was working on. There were two pages where postbacks were being completely ignored. If you clicked on anything that required codebehind or postbacks to work, such as the login/logout button, the save button, etc., an HTTP POST would occur (verified by Firebug), but the server would ignore the POST and serve up the page as if you did a GET.

Interestingly, it worked great on IE and Safari, but failed on Chrome and Firefox. What was even stranger was that everything worked properly when debugging in Visual Studio, but the failure occurred when the site was deployed to IIS.

I ended up using WinDiff to compare the HTML output differences between what was served up from Cassini (Visual Studio during debugging) and IIS. There was one line that was different:

(If you’re impatient, you can see the code before reading the article)

Lets dig into how you can create a custom activity for Sharepoint Designer using Visual Studio.