Having recently changed over to using a Droid Incredible, I’m having to rework some of my productivity tools to work with the Incredible. Part of that was finding a new GTD / Todo list app. 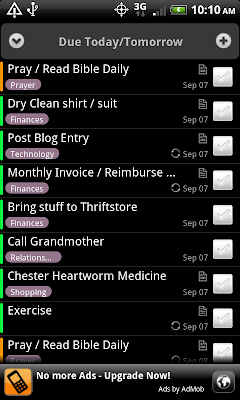 I had used OmniFocus on my Mac / iPod Touch, but ever since the iOS 4 upgrade, the only way to get it to sync is to wipe out the OmniFocus database on the iPod Touch and start over (My guess is that they updated their software to work with multitasking, and as a result it breaks with devices, like the iPod Touch 2G, that don’t support multitasking on iOS4). Not a great solution. After waiting several months for a fix to this, I’ve given up and I looked around for something similar for my Droid. I strongly considered Remember The Milk, but the Mobile side of that app was rather weak. 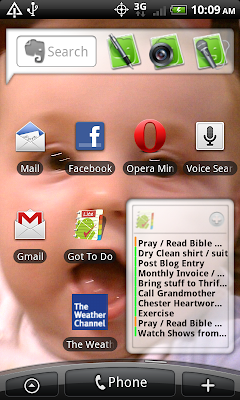 I ended up settling on Toodledo. It needs some work on the ability to set custom filters, but overall it does the job I need it to do and it even has a widget for the Droid that shows my ‘hotlist,’, which is a huge help for me to quickly see the next 10 items on my list, color coded by priority.

Will I stick with it long term? I’m not sure. But so far I like it. I did spend a couple of hours transferring all of my todo items from OmniFocus to Toodledo the other night, so I’m committed to trying to make it work.

I use it to keep track of my grocery list, and I walk around with it at Kroger like a true geek, checking things off as I put them in my cart - my wife has had several good laughs at me as a result.

But I also use it to keep track of when to do maintenance on the cars and house, errands I need to run, etc. It’s great to have a GTD tool that works on the web and syncs to my Droid.